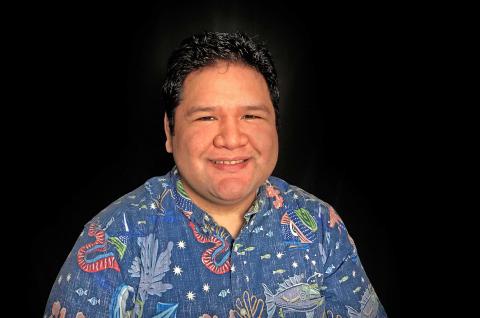 Dr. Michael-Thomas Foumai (b. 1987, Honolulu, Hawai‘i) is a composer of contemporary concert music and educator. His music has been described as “vibrant and cinematic” (New York Times) and “full of color, drama, and emotion” (Milwaukee Journal Sentinel). A prolific composer of symphonic music, his work focuses on storytelling and the history, people and culture of his Hawaiʻi home.

Recent projects have focused on issues and stories facing the people of Hawaiʻi and climate change. Raise Hawaiki, a large scale choral-symphony based on the Polynesian voyaging canoe Hōkūleʻa was commissioned by the Wallace, Elizabeth and Isabella Wong Family Foundation to celebrate the return of Hōkūleʻa from her three-year world-wide voyage Mālama Honua.

Dr. Foumai arranged a number of works for string orchestra for the organizations Sounds of Resilience concert series, live streamed from the historic Hawaiʻi Theatre. From May to August 2021, the Hawaiʻi Symphony Orchestra performed seven works and new arrangements of Hawaiian songs as part of the inaugural 2021 Sheraton Starlight Series at the Waikīkī Shell.

With deep ties to the Hawaiʻi Youth Symphony, Dr. Foumai’s work for the state’s premier youth orchestra organization began when he severed as the associate concertmaster. His close relationship with former directors Henry Miyamura and John Devlin has led to the creation of a combined 17 new works for orchestra, band and chamber ensembles, including Liu-Si, a large scale choral-concerto-symphony based on the Tiananmen Square protests of 1989.

Performance highlights include Concerto Grosso with Yannick Nézet-Séguin and the Philadelphia Orchestra, The Spider Thread with George Manahan and the American Composers Orchestra at Carnegie Hall, Music from the Castle of Heaven with Osmo Vänskä and the Minnesota Orchestra at Orchestra Hall, Lady Dark (Orig: Three Scenes from the Hell Screen) with Francesco Lecce Chong and the Milwaukee Symphony, The Light-Bringer with Matthew Kraemer and the Buffalo Philharmonic Orchestra and with James Feddeck and the Aspen Philharmonic Orchestra, and Nataraja with David Alan Miller and the Albany Symphony.

Dr. Foumai first gained national recognition in 2004 with the ASCAP Morton Gould Award for his orchestral work The Bicycle Ride and shortly after in 2008, he was selected into a cohort of international composers collaborating with composer David Rosenboom and writer Martine Bellen in the creation of a multi-media opera called Ah! A Counterpoint of Tolerance.

In addition to composing, Dr. Foumai has produced several web-based documentary series, trailers and teasers to serve commissioning and performing organizations in offering a behind-the-scenes glimpse of the creative process through social media. These video series were crafted to inform and invest the viewership leading up to a performance for a richer and enhanced concert experience.