An effulgence fills the southern boughs 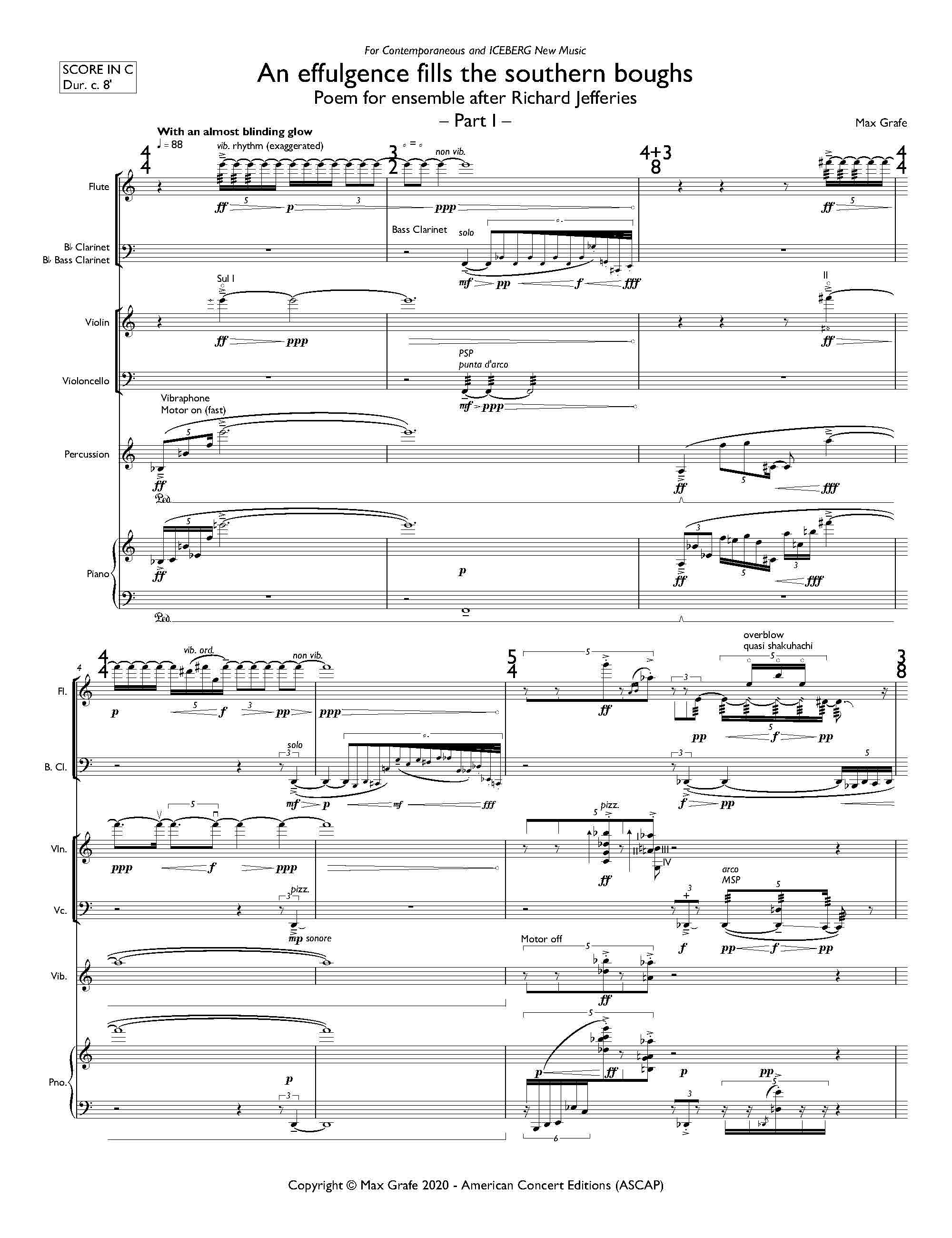 An effulgence fills the southern boughs

Composer's Note:An effulgence fills the southern boughs, like much of my recent work, is a musical response to a work in another medium: in this case, a brief excerpt from 19th-century English author Richard Jefferies’ journal Nature Near London.

Everything gives forth a sound of life. The twittering of swallows from above, the song of greenfinches in the trees, the rustle of hawthorn sprays moving under the weight of tiny creatures, the buzz upon the breeze; the very flutter of the butterflies' wings, noiseless as it is, and the wavy movement of the heated air across the field cause a sense of motion and of music.

The leaves are enlarging, and the sap rising, and the hard trunks of the trees swelling with its flow; the grass blades pushing upwards; the seeds completing their shape; the tinted petals uncurling. Dreamily listening, leaning on the gate, all these are audible to the inner senses, while the ear follows the midsummer hum, now sinking, now sonorously increasing over the oaks. An effulgence fills the southern boughs, which the eye cannot sustain, but which it knows is there.

The sun at his meridian pours forth his light, forgetting, in all the inspiration of his strength and glory, that without an altar-screen of green his love must scorch. Joy in life; joy in life. The ears listen, and want more: the eyes are gratified with gazing, and desire yet further; the nostrils are filled with the sweet odours of flower and sap. The touch, too, has its pleasures, dallying with leaf and flower. Can you not almost grasp the odour-laden air and hold it in the hollow of the hand?

Though the entire book from which the excerpt is taken is full of the same delirious and haunting language, I chose this particular passage for its rich evocation of the boundless fecundity, exceptional tranquility, and arresting magnificence of the natural world—images that strongly recalled my childhood in rural New York. Rather than attempting to reproduce the structure and cadence of Jefferies’ writing in my musical response, I sought instead to capture the distinctive atmosphere that it conjures. As such, the music meanders freely between moments of multifaceted activity and meditative stillness for most of its duration, before erupting into a vertiginous exclamation of joy at its conclusion. An effulgence fills the southern boughs was composed for Contemporaneous in collaboration with ICEBERG New Music, and was completed in New York on February 15, 2017.