Etudes for Piano Book I: A Cultural Odyssey 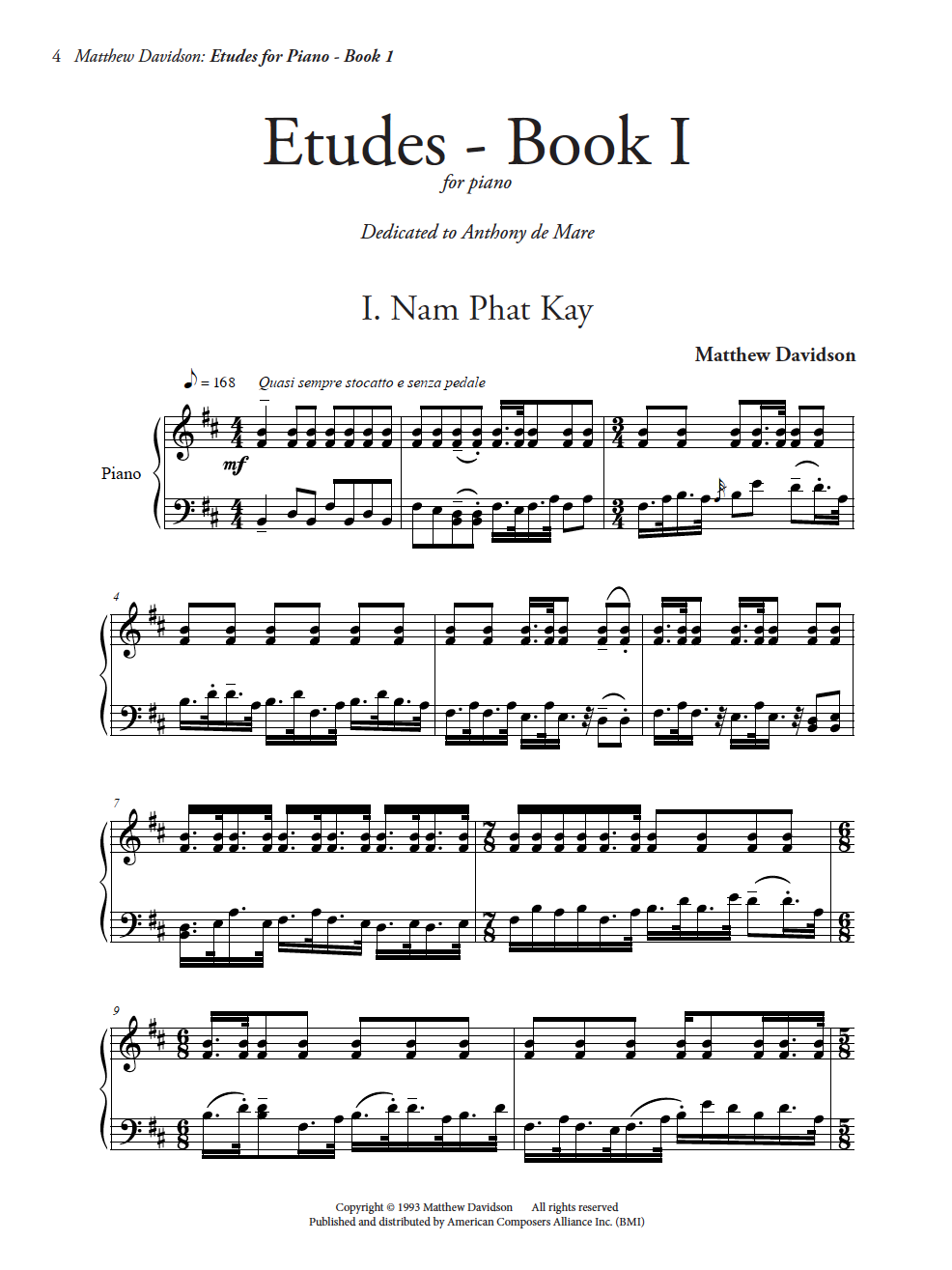 Etudes for Piano Book I: A Cultural Odyssey

1. Nam Phat Kay; 2. Sandouri; 3. Most done Travelling; 4. Komer Chakra; 5. Krivo Horo. It is preferable that the pieces be performed together, however they can be performed individually.

Etudes Book I is the first volume of a two-volume set of piano etudes dealing with compositional rather than with pianistic concerns. Most importantly, it finally gives full expression to my interest in musics outside the arena of so-called western “art” music.

Nam Phat Khay is a literal transcription of a solo played by Nouthong Phimvilayphone on the Kaen, a Laotian reed instrument. The player should note that the contrast is in the subtlety of the changing rhythm in the left hand melody. The title means “In the Current of the MeKong” and the original can be heard on a CD by Harminia Mundi entitled, LAOS – Lam Saravane – Musique pour le khene.

Sandouri is the name of a Greek instrument used in another literal transcription I have made. The recording is from a CD entitled Memories of the Peoples (on Auvidis-Unesco) of Konsolas Ermollos, a Sandouri player from Greece. The Sandouri is a distant relative of the modern Pianoforte. This movement can be played directly onto the strings inside the piano with xylophone mallets or something of that nature. However, it is has also been performed to great effect on the keyboard whilst placing aluminium or tin foil under the dampers.

Most Done Travelling In this movement I transcribed the melody of a Gospel song as sung by the Tuskegee Institute Singers recorded in 1917. The track was from a record entitled, An Introduction to Gospel Song on Folkways Records. I then harmonized the melody in my own way, and in the middle of the transcribed tune I placed a series of four-bar pan tonal variations. The variation where the inside of the piano should be strummed like an autoharp is most effective when a metal thimble is placed on the finger of the hand that is strumming. The variation with harmonics on the strings requires the indicated strings to be touched at one half length, producing a sound one octave higher than written.

Komer Chakra is more of an arrangement than the first two. The melody is from a group of Quechuan panpipe and drum players recorded in the Community Kaalaya, Bautista Saavedra Province of Bolivia. Like the second movement, it too is from a CD entitled Memories of the Peoples. The melody itself was very hard to transcribe (despite its apparent simplicity) because of all the overtones resulting from such a large group playing together. I then harmonized the melody in my own way. The left hand plays the rhythm of the drum as heard in the original recording.

Krivo Horo Like the previous movement, this is more of an arrangement than a literal transcription. The recording is from a Nonesuch CD entitled, Dances of the World, and it is a Bulgarian village band playing a “crooked dance” (hence the title). In the original, there are two wind instruments: a kaval (7-hole reed pipe), and a gaida (bagpipe) which sometimes play in unison, but for the most part, play a subtle and intricate counterpoint. For this reason, I have often ‘simplified’ the melody so it may be played by the right hand on the piano and the left hand may play the accompaniment.