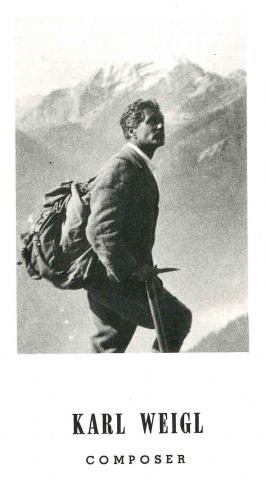 Karl Ignaz Weigl (February 2, 1881 – August 11, 1949) was born in Vienna, the son of a bank official who was also a keen amateur musician. Alexander Zemlinsky took him as a private pupil in 1896. Weigl went to school at the Franz-Joseph-Gymnasium and graduated from there in 1899. After that, he continued his studies at the Vienna Music Academy, where he became a composition pupil of Robert Fuchs, and also enrolled at the University of Vienna, studying musicology under Guido Adler, having Anton Webern as a classmate. His only opera, Der Rattenfänger von Hameln, premiered in Vienna in 1932.

When the Nazis occupied Austria, in 1938, Weigl emigrated to the United States, together with his second wife, Valerie (Vally) and his son. He obtained a number of increasingly important teaching posts: at the Hartt School of Music, at Brooklyn College, at the Boston Conservatory and, from 1948 on, at the Philadelphia Academy of Music. He was an important early member of ACA. He died in New York in 1949.

Weigl wrote many compositions including symphonies, chamber music pieces, string quartets, and songs for solo piano. The ACA Archive has preserved more than 200 Weigl scores, which are available for sale and rental through the American Composers Alliance.

Photo of the composer taken by Ernst Kassowitz, near Seattle, in 1947; courtesy of the ACA Archives, Special Collections in Performing Arts at the University of Maryland.