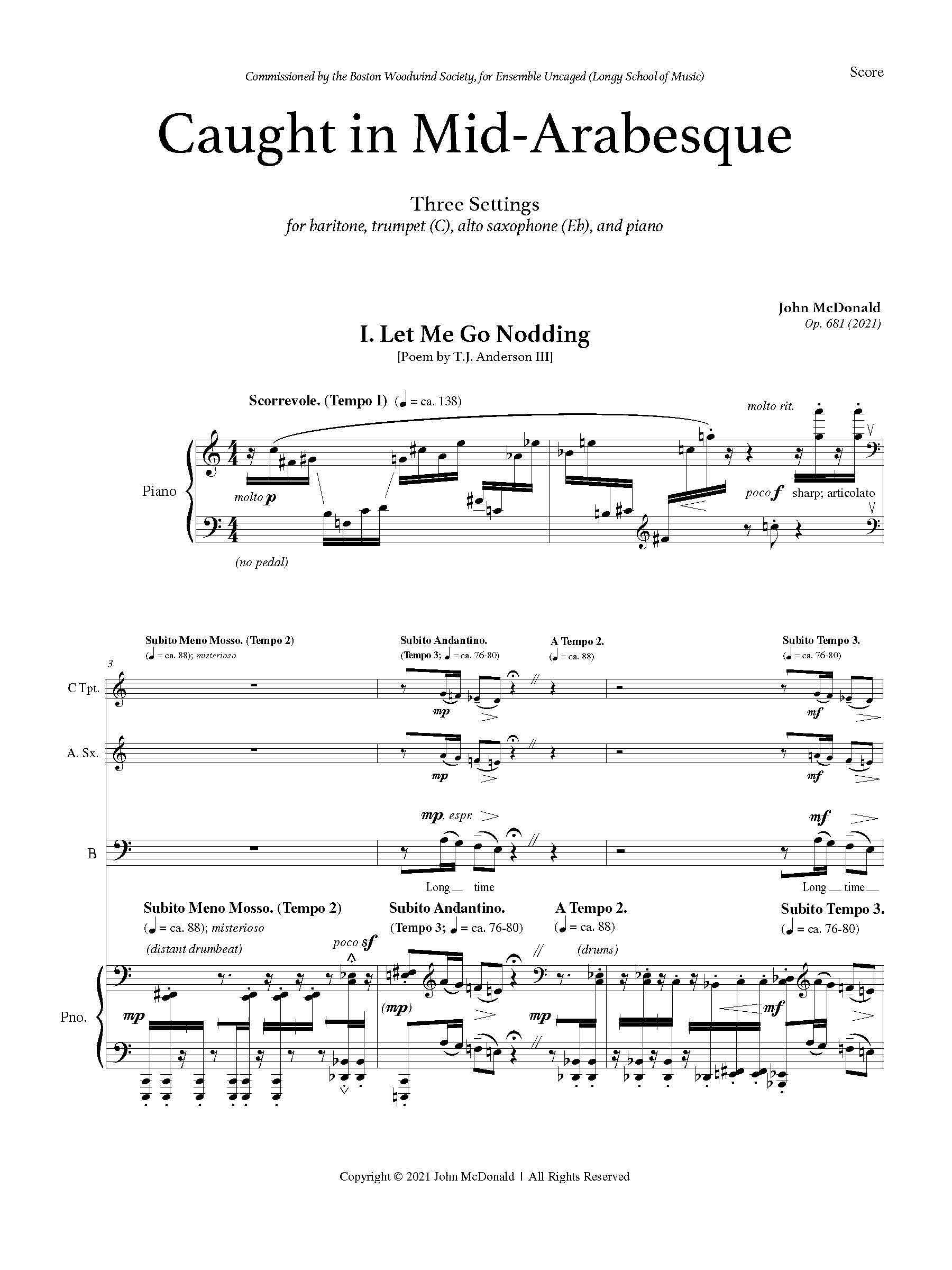 Designed for four members of Ensemble Uncaged at the Longy School of Music at Bard College, these three vocal/instrumental settings explore a peculiar disorientation. The more I age, the more the confusions and memory-mixtures of dreams feel just like being “awake.” This dance between sleep-experience and consciousness-experience follows the same step. Though sometimes “off” in its circadian flow, it’s still rhythmic. At once disturbing, mysterious, and poetic, this apparent symptom of aging in the 21st Century is the concern of this tripartite set.

Caught in Mid-Arabesque opens with the poem Let Me Go Nodding by TJ Anderson III, who describes his work as inherently musical. He has said that “beyond the apparent musical references, I am mainly an aural poet. I hear things in terms of musical phrases during my composition process, and while ‘silent reading’ is important to the text, orality is crucial.” Anderson’s startling images, which embrace the poet’s remembered experiences (in particular his time as a psychiatric technician for geriatric patients) and dreams (including a nightmare about becoming a wild dog) alongside strong suggestions of and references to slavery, lynching (“on a scaffold of baritones”), colonization (“the yellowing lamination of Victoria Falls”), and degradation/precarity, seem to spring directly from the recalled instant-on-pause of his “five-year-old daughter caught in mid-arabesque.” Hence the title of the work.

Having become a grandfather (three grandchildren have graced my life since 2018, two of them making entrances during the Covid-19 pandemic), the quoted comment about pianist/composer Eugene d’Albert’s pianistic handling of the Chopin Berceuse somehow fit into the intended expressive world of these settings - as an interlude in which I borrow snippets of Chopin as if singing my grandkids to sleep (through trumpet and sax). Moving attaca from Chopin to Schubert, a poignant poem in French sketched on a napkin by dear friend and eminent political scientist Stanley Hoffmann in his last days, explores the emotions Schubert’s sound-world excited in this man. His paradoxical Alzheimer’s symptoms of feelings blossoming while earthly grounding is shaken were somehow unified by his words. And as with all three inspiring texts I have attempted to set here, “the core is always the same􀙒a synthesis of gentleness and pain.”

I am grateful to Andy Kozar, Co-Director of Ensemble Uncaged (Longy School of Music of Bard College), and to Ken Radnofsky, President of the Boston Woodwind Society, for commissioning and suporting this project.