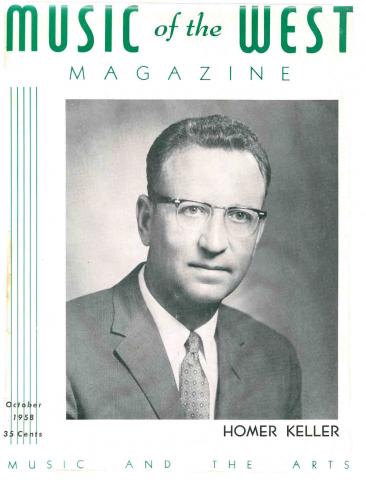 California-born composer Homer Keller (1915-1996) received his musical training at the Eastman School of Music under Howard Hanson, and as a Fulbright scholar in Paris, he studied with Arthur Honegger at the Ecole Normal de Musique. From 1947 to 1953, Mr. Keller taught composition and counterpoint at the University of Michigan, and during the summers, worked with students at the National Music Camp at Interlochen, Michigan.He received his Bachelor's and Master's degrees in music from Eastman, in 1937, and 1938.

Mr. Keller's First Symphony, a prize-winning work of the Henry Hadley Foundation in 1939, was premiered in Carnegie Hall by the New York Philharmonic under John Barbirolli in 1940. His Second Symphony was performed by the National Symphony Orchestra in Washington, DC, in 1950. Howard Hanson and the Eastman-Rochester Symphony recorded Keller's Serenade for Clarinet and Strings for Mercury Records.

For three years, he resided in Honolulu, Hawaii, where he first taught at the Palama Settlement and the Punahou Music School, later becoming a lecturer in msuic at the University of Hawaii. He was President of the Honolulu Chapter of the National Society of Arts and Letters.

His work in Hawaii exposed him to Pacific Island folk musics, which he credited with widening his own musical thought with regard to melody and harmony.

In December, 1956, the Honolulu Symphony, with George Barati conducting, gave the premiere performance of Keller's Third Symphony.  Austin Faricy, the music critic for the Honolulu Star Bulletin, reported, "Written richly and idiomatically for orchestra, Keller's symphony alternated between nervous energy and large repose, with a wealth of allusion to contemporary rhythm and themes, and some reference to folk material...Mr. Keller received an ovation at the end."

Keller taught at the University of Oregon in Eugene from 1959 to 1976.

Many of his music scores and some biographical and publishing history documents are with the American Composers Alliance. His official papers and manuscripts are held by the Eastman School of Music Library; The ACA collection is held at Special Collections in Performing Arts at University of Maryland.