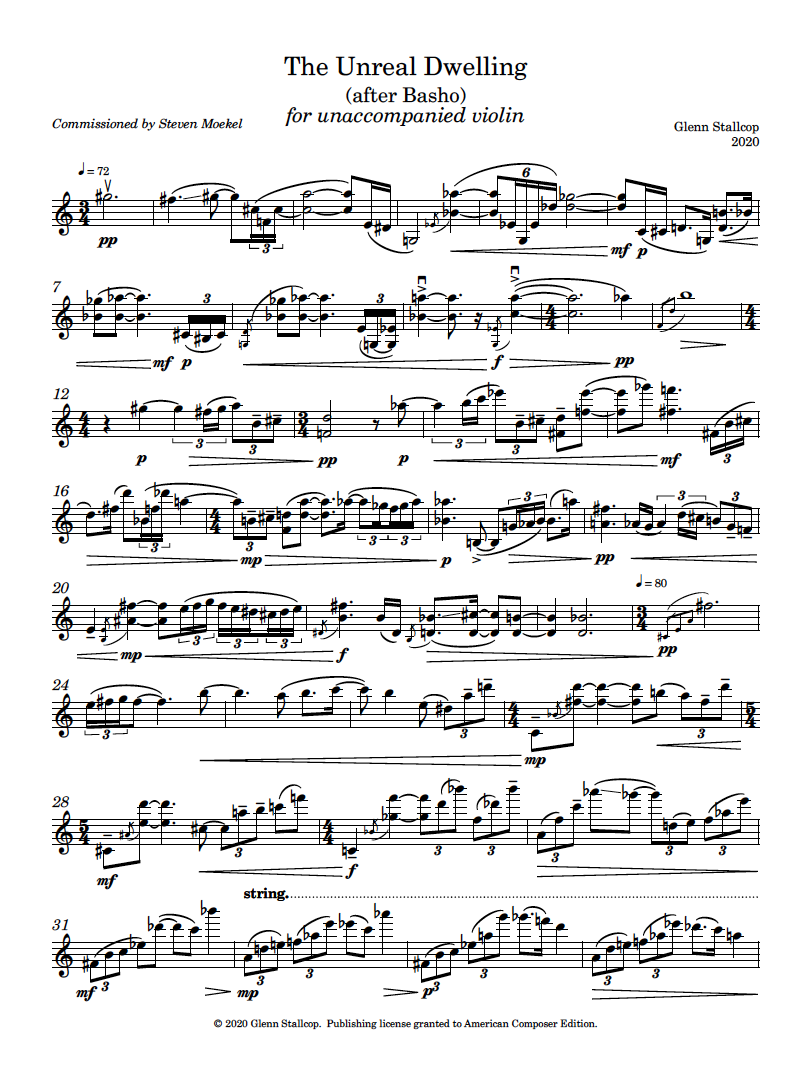 The morning that I received the call from Steven Moeckel in which he asked me to write a piece for unaccompanied violin, I had been reading from a collection of literary prose by Matsuo Basho, the famous Japanese haiku poet. We were in the midst of the long shutdown for the Covid-19 pandemic. Musicians were not working; whole symphony seasons had been cancelled. We discussed the artistic (let alone financial) crisis the situation was creating. He talked of having taken a trip to the Oregon coast and taken long walks through misty forests to facilitate some serious artistic soul searching. He had formulated a plan for an unaccompanied recording and wanted to commission a new work for it.

His talk of hermetic isolation in forests of the Pacific Northwest (where I grew up) seemed to fit into the mood of the material I was reading. I decided start writing with a working title of Mists of the Unreal Dwelling. The “unreal dwelling” was a hut Basho had lived and recuperated in after his famous ten-month journey to Northern Japan in 1690. It was tucked away on a mountain slope behind an oft-neglected shrine overlooking Lake Biwa north of Kyoto. The image seemed to convey both the isolation and reflection which brought the piece into existence.

As I wrote the piece, however, the fog lifted and the work became more extroverted and showy. The “mists” were swept from the title, which became just The Unreal Dwelling. Basho wrote an extended prose poem about the hut and his time there. I was taken with how he wrote with affection of the hut’s disrepair and his own battered, road-weary body. His ideals of asceticism. however, were disturbed by his artistic vision and constant restlessness. The music is indeed restless, and displays a fair amount of virtuosity. The work was completed in August of 2020 in Phoenix.