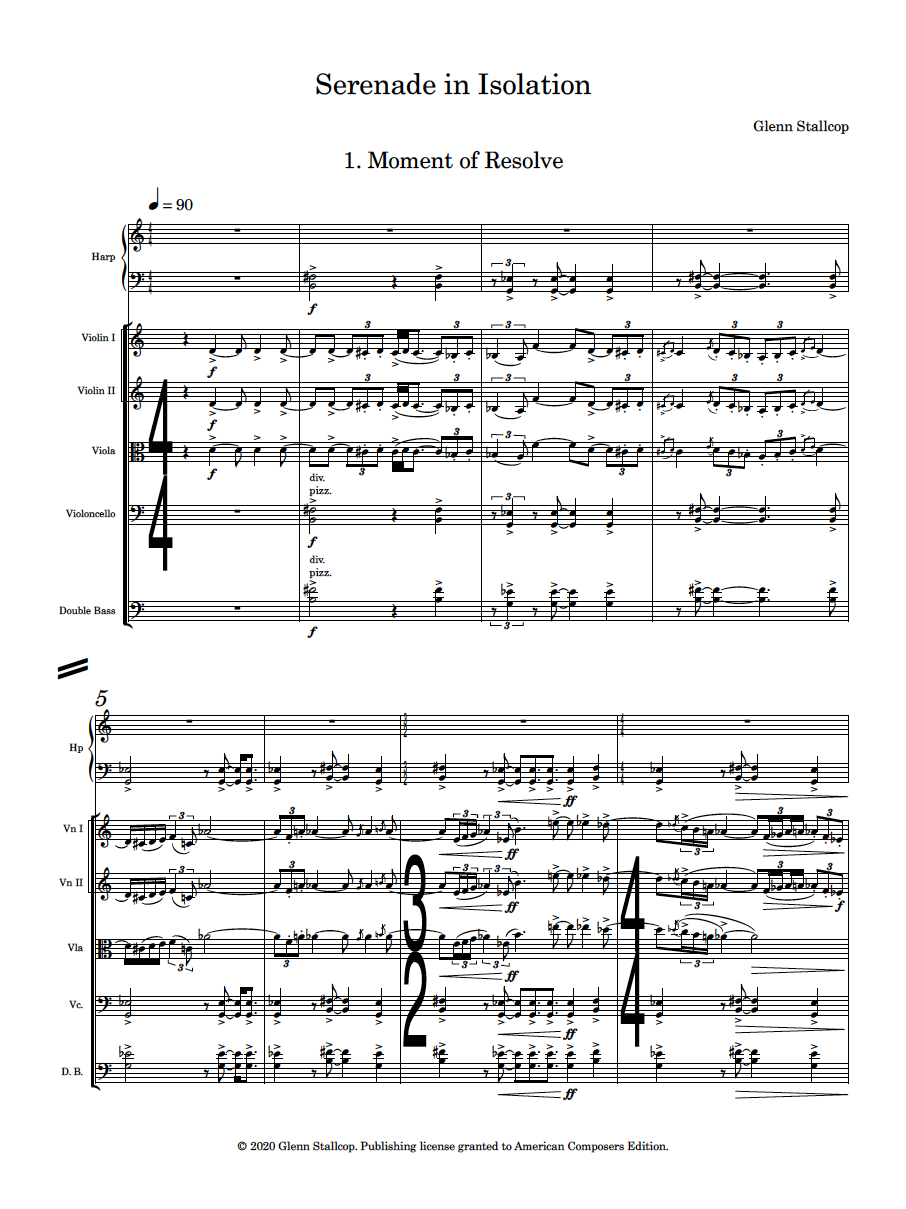 Serenade In Isolation was written during the first three months of the Covid-19 pandemic in the Spring of 2020. Most of it was written in isolation at our cabin outside of Ash Fork, AZ. Though I was retired at the time, and a bit of a hermit by nature anyway, the complete isolation brought on by the crisis was a bit much. I really missed playing and performing, and when I wrote this Serenade, I was thinking of my colleagues.

Like most of my music for the last thirty years, the music originated as a keyboard improvisation. Though the first, second, and, especially, the last movement have gone through multiple alterations and transformations, the third and fourth movement, though orchestrated, are almost literal transcriptions.

In writing a five movement string serenade, I suppose I am modeling after Dvorak and Tchaikovsky. But, except for the inclusion of an elegy (of sorts) there is no other similarity. The first movement starts off with a good deal of resolve, and it shows quite a bit of determination. However, with the introduction of the solo quartet, it begins to get distracted. I missed my family and friends, and felt badly for those who were getting sick. The ending mimics the opening, however, though it pushes for resolution it ends up not getting anywhere.

The second movement alludes to the fact that, unlike some, I did not have to face this alone. My wife, Leslie, not only was my loving companion but a problem-solving guru, and guided us through the complex alterations of our routine with great skill and determination. Though we have spent nearly a lifetime together, the added intimacy was both a joy and a wonder.

The third movement is conjured by joyful memories. There is absolutely nothing like having a toddler around the house for both sheer joy and sheer panic. This toddler is constantly testing him or herself; running, climbing, and joking with parents. He or she eventually begins to tire and a parent is there to hug and console, and convince them to take a nap.

We have lost many people in this pandemic, and we are losing more every day. Most victims have been isolated and intubated, and have not had the chance to even say goodbye. The fourth movement is their song.

About two months into the pandemic came the horrendous killing of George Floyd in police custody. The demonstrations, which became worldwide, have been raging ever since. Though the violence has now been scaled back, the initial reactions from the police were exactly the kind of behavior that were being protested. The fact that those protesting risked infection by just gathering, added to their impact. The last movement is about the protesters. It starts with a quote from Mendelssohn’s Midsummer Night's Dream and ends with an allusion to Respeghi’s Feste romane. In between are also allusions to the first and fourth movement. The ending features a long buildup leading to conflict at the end. Lately, conflict at the demonstrations seems to have subsided, and there also seem to be the beginnings of some tangible results. But the problems are real, and I hope the awakening leads to some enlightened solutions.

Movements may be performed together or separately as independent works.