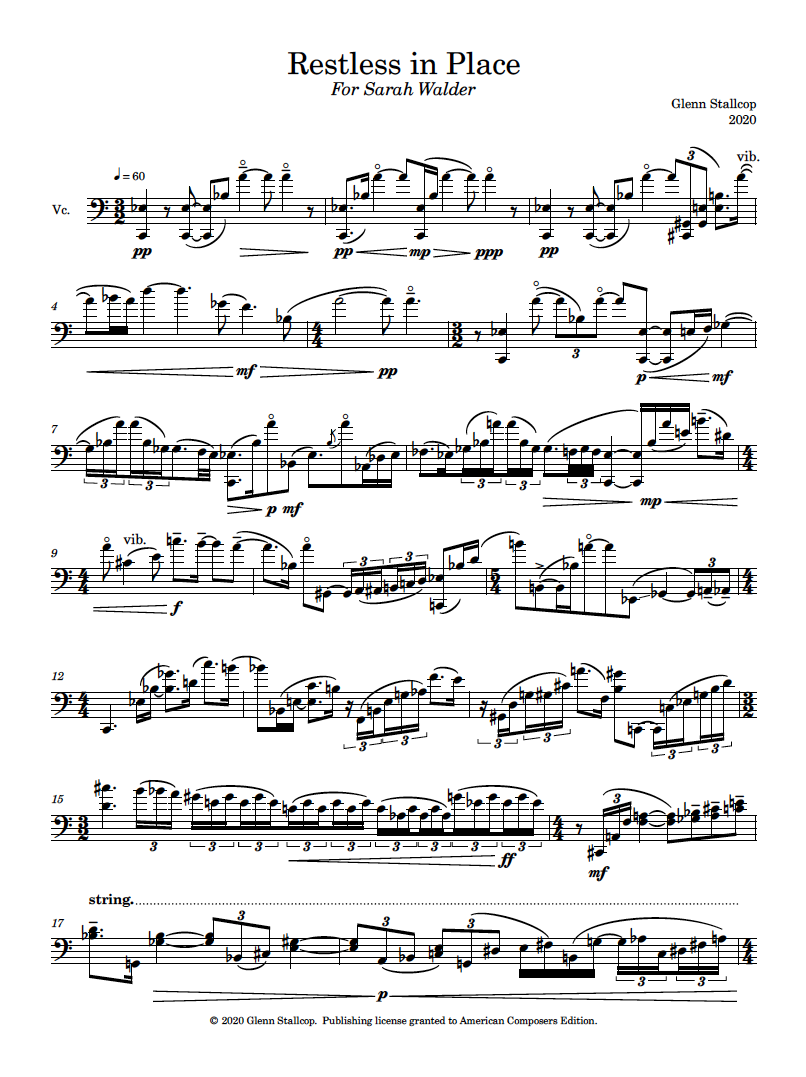 I had written an unaccompanied piece, Cross Channel, for Sarah Walder in 2018 for a series of unaccompanied recitals she did in 2019. She had presented a terrific performance, and it was a wonderful experience. Then came the Covid Pandemic of 2020. Sarah, who was commuting between the Netherlands and Arizona a couple times every year, was stuck in the Netherlands. For much of the time she was also stuck in her apartment. We would talk every month or two, and her frustration was quite evident if not unusual for the times. Though retired, I was also feeling annoyed at not being able to perform at all. I had recently written an unaccompanied violin work for Steven Moeckel and when I mentioned that plus the fact I was “beyond bored,” Sarah casually mentioned that she was also doing a recording, and another cello piece would be nice.

So I have tried to write a piece that attempts to capture the useless anxiety we are all facing in the midst of these strange times. It tries to capture the restlessness that comes from hunkering down for months on end. As fond as I am of being by myself with time and space for creative endeavors, it can be too much of a good thing. The piece for Sarah is the second I have done for a musician whose project is to make an unaccompanied recording. Zoom projects and home recitals only provide so much satisfaction, and little if any financial reward. But a musician is usually propelled primarily by inner fire and artistry, and a challenging project of this sort seems a logical and sanity maintaining solution to having one’s entire profession shut down.

Most of my music is derived from keyboard improvisations and Restless In Place is no exception. though it has taken some adjustment and imagination. I have tried to work with a number different rather stationary musical ideas, and then write music which tries to break those bonds. It would be like trying to break out of a box, or push on the walls of a padded cell. There is serious effort and resourcefulness, but the walls are solid.

Included in the collection American Miniatures for Cello.