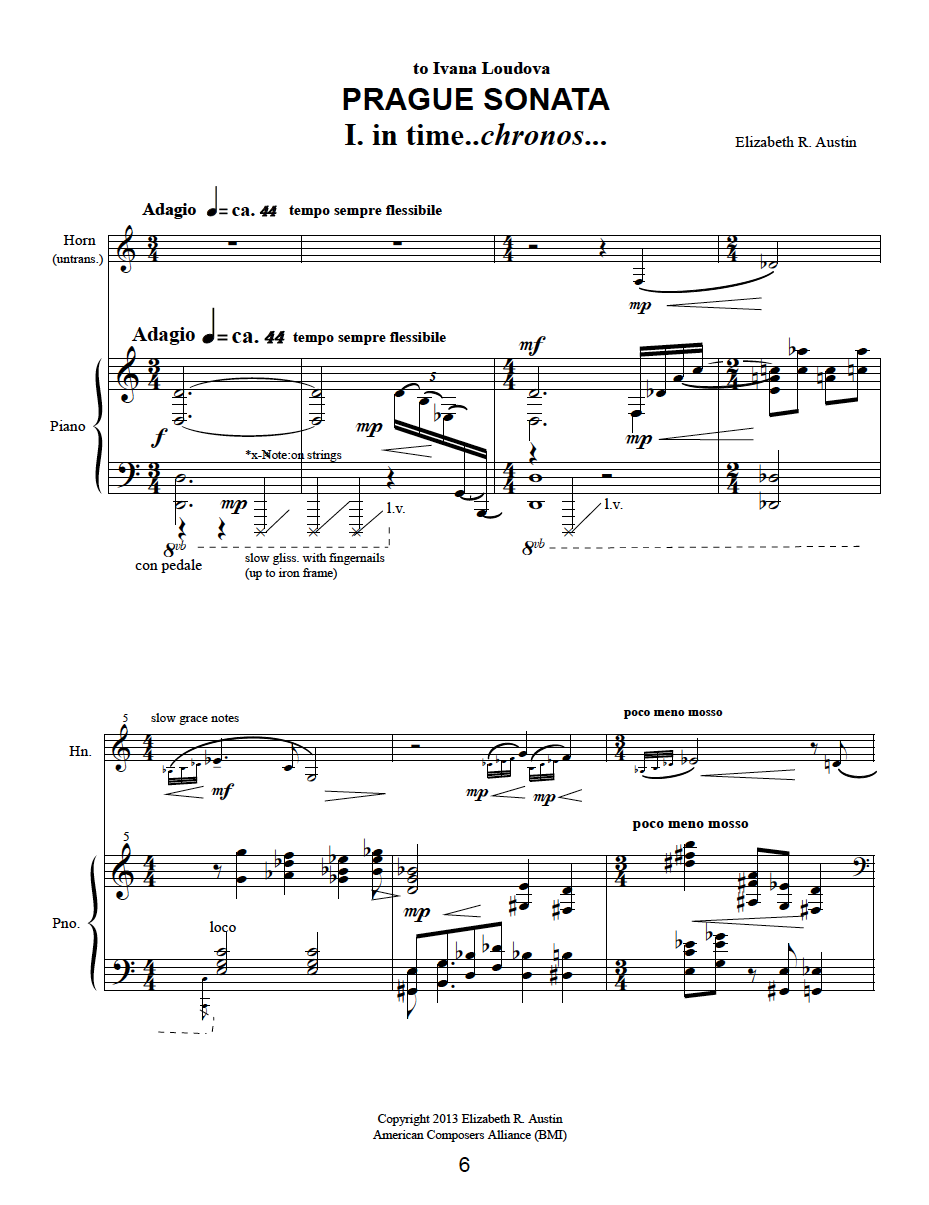 In this music, the idea of ‘sonata’ is not limited to one movement, but rather is to be viewed as the overall structural principle for the entire work. That is, instead of being confined inside of one movement, three movements reveal the sonata principle. Sonata form is the reconciliation of opposites, the combining of opposite values into unity. Plato’s Harmonia subscribes to the metaphorical idea of harmony almost as carpentry, the interweaving of disparate elements.

I use opposites in a number of parameters in my music: the combination of tonal with non-tonal elements, the pitting of musical quotation with newly-composed material, the textural difference between two instruments, and, in this work, the reflection of chronological/metrical time as opposed to events flowing outside of such considerations, with each instrument or party adhering mostly to its own time frame.

The first movement, then, is the sectional exposition or chronological layout, ‘in time’, of themes by horn and piano, equal partners in this narrative. The adagio introduction centers around ‘d’, which is the opening tonality of Mozart’s ‘Prague’ Symphony, K504, premiered in Prague on January 19, 1787. Gestures in the horn part imitate motives from Mozart’s great work, but this movement is less delineated formally at the outset. The process of becoming provides the justification here. A Mozartean degree of rhythmic instability becomes increasingly evident, as the movement progresses, with contrasting attitudes between horn and piano. Melancholy in the piano and near-defiance in the horn (similar to the mood of Mozart’s ‘Prague’ Symphony) become reconciled towards the end, with a plea from the horn, followed by a quote from Dvorak’s Symphony #9 (‘New World’). Following Dvorak, I used Swing Low, Sweet Chariot, in the horn, weaving a musical thread from the past into new fabric.

The development section of sonata form is laid out in the second movement. The image here is of light streaming outside of linear time. The listener moves with the flow, a timeless space between the past and the future, with ‘chronological’ succession being brought into question. The horn motives become more rapturous and lyrical, as opposed to the ebullient patterns in the piano. Both players seek idiomatically to do what they do best. Once or twice in their parallel streams, they acknowledge one another in a conscious way.

The intense energy gained propels the music on into the final movement, a recapitulation, with the two parties in step, in imitation. This movement is structured loosely around the poetic form of the sixteenth century villanelle, which alternates two main ideas and their ‘continuing’ variations in strophic form. James Joyce’s use of the villanelle in his “A Portrait of the Artist as a Young Man” influenced me, in that he presents and juxtaposes two realities, an inner and outer reality, and moves fluidly between them.

About midway through the movement, the horn pulls all pitches together, with declamatory strength, rounding out the movement. One hears the hornist simultaneously sing and play a traditional horn motive. Both instruments have been ‘transfigured’ through the timelessness of the middle movement.