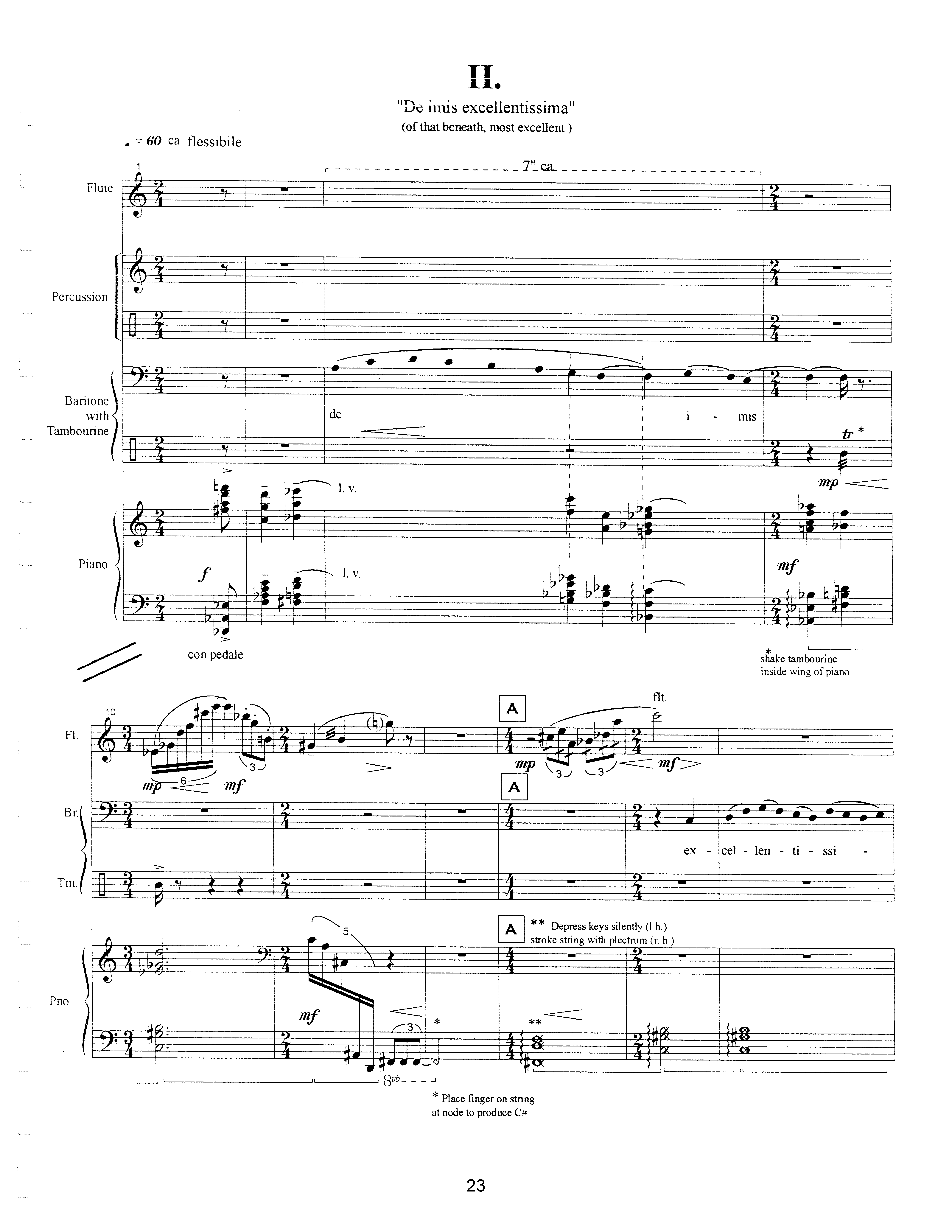 This work is based on Antiphon No. 16, “Caritas Abundat” of Hildegard von Bingen. It consists of  five movements, the duration of which grows from the brief first movement, arched to the large third movement and reduced again to the smaller fifth movement, in an arch form. The five sections  are meant to be points of a star, with a brief but mystical center at the end of Movement III. Concerning the number symbolism of medieval times, the numbers 3 and 4, as reflected in the duration of these movements and in the overall pulse (rather than meter, which is not defined by the barlines, which primarily serve as conducting/performing aids) delineate the stance of the listener between God and the world.

The text of this Antiphon has been divided into five parts, with each part comprising one movement of the work:

The kiss of peace is bestowed.

The choice of instruments to accompany the singers, as Hildegard outlined,  are also balanced and symbolic. For instance, Hildegard suggests in Scivias that the tambourine would be fitting to accompany songs; the tambourine and the triangle (an expression of joy) are played by the individual singers (if the singers do not wish to play these instruments, they may be played by the percussionist or another player), who, in turn, are heard in concert with flute, clarinet, piano, and percussion. The percussion section includes a variety of drums, suspended cymbals, and tubular bells (chimes), among others, to underscore both Hildegard’s instruction as well as her fervor.

Upon examination of this Antiphon, one notices the balance found in every parameter of the work. For instance, the beginning and ending pitches of each line (or section) alternate between d and a, with the lowest note in the range (a) being sounded at the mid-junction of the text (‘super sidera’). I have, therefore, sought to balance proportions in corresponding variations on Hildegard’s melodic line. Instrumentally, in Movements I and II, the mezzo-soprano is combined with clarinet, the baritone with flute, both of whom are accompanied by piano and percussion; the assignment of instruments to singers is reversed in Movements IV and V.

This sense of symmetrical balance is prevalent throughout: for instance, the use of the retrograde motive (with rhythmic diminution) in Movement II was used as an equilibrium principle. The third movement involves tutti forces, since it is central to the whole. The use of tritonal relations in Movement IV also signifies a balanced octaval juncture while, simultaneously, indicating  an  affective direction.

I called upon the proportion of the Golden Mean (but not doggedly!) in planning significant musical events, instrumental entries, tone color contrasts, or thematic recurrence, but only employed it when the direction of the music allowed. For instance,  about  one-third of the way through Movement I, the tubular bells (chimes) can be heard, always reminiscent of the sacred. In Movement II, the opening sonorous chords of the piano recur at an important proportional juncture. The sense of symmetry in this movement extends to the appearance of the retrograde version of the theme (in rhythmic diminution) four measures after the theme itself has been presented. In addition, at the point approximately one-third through Movement III (measures 42 ff.),  there is a dialogue between the voices and the woodwinds, the woodwinds sounding the final motivic cells of the chant line in retrograde and in diminution, as the voices sing the section of chant from the beginning; the lines meet (measure 47) and then continue on with more chromatic variations.

In using this Antiphon as my inspiration, I wished to retain its basic character and so did not alter its melodic line, as each chant portion was introduced at the beginning of each movement. In Movement IV, one can also hear  the eleventh century Sanctus trope, Divinum mysterium, whose English text, “Of the Father’s love begotten” is related to the message of “Caritas abundat”; the melodic direction of certain phrases in these two chants are similar enough to be used in combination in Movement IV. In addition, the specific textural passage in this Movement is “…atque amantissima in omnia” (“..in all the most loving”).

The contrast between proportional and metrical notation allows the performers the desired elasticity to weave in and out of a regular pulse. I sought a certain liberalization of a time/space line, moving towards a dispersion in textural density in the last two movements.

Finally, the use of coloristic instrumentation was directed toward an ecstatic mood, one of turbulence and joy. Only in Movement V, to indicate human and divine suffering, can one hear certain ‘weeping’ gestures as paradox at the point of text: “exalted King”. I have tried to capture distinct ‘points of light’ as well as earth-centeredness, capturing the unique combination of the mystical with the practical which was so characteristic of this great saint.

Edward Rothstein wrote: “Aristotle said of the Pythagoreans… (who believed music to be an expression of number in sound)…,‘They supposed the whole heaven to be a  harmonia and a number.’ “