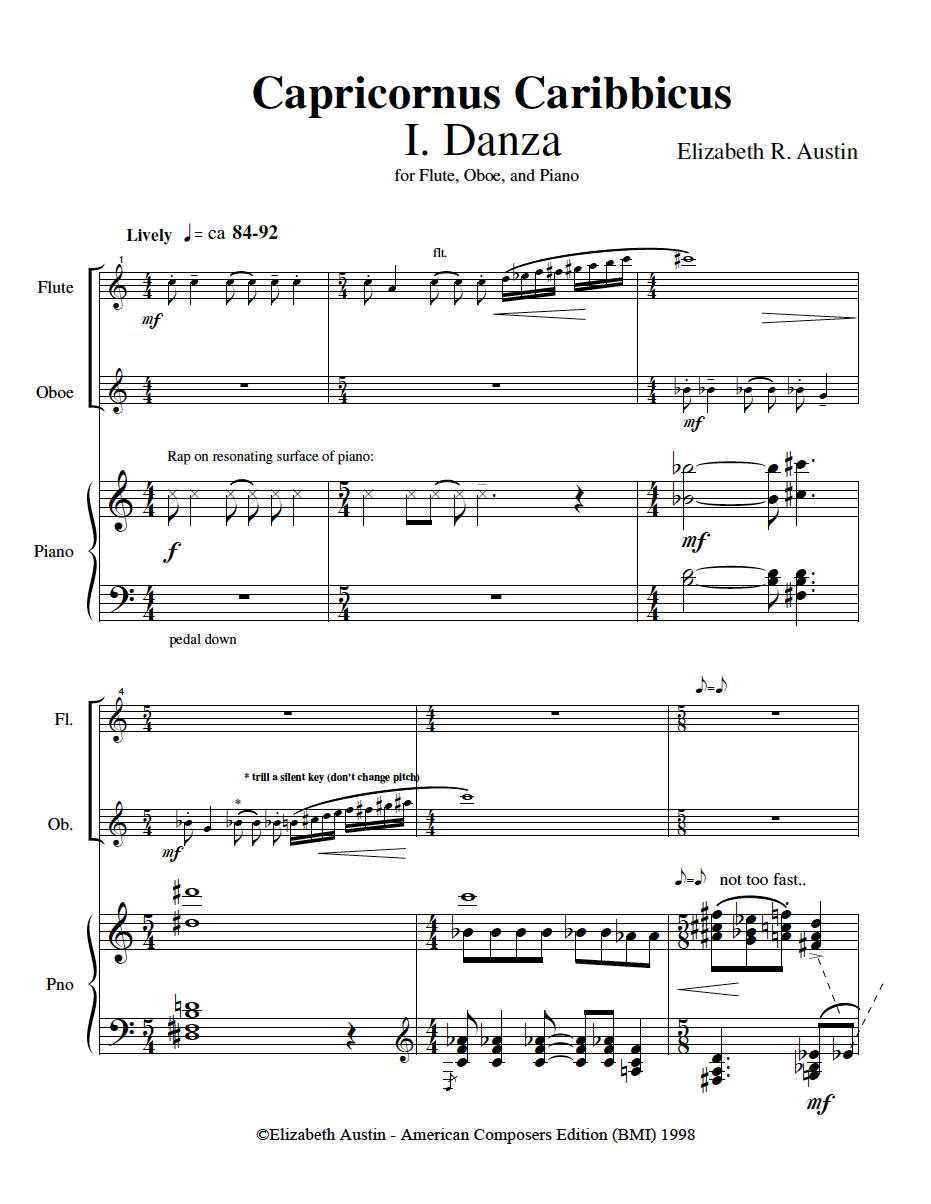 Scoring & Instrumentation
Flute, Oboe, and Piano
Alternate Title
CAPRICORNUS CARIBBICUS
Year Authored (or revised)
Duration (min)
10
Movements
I. Danza
II. 'Blessed are the pure in heart, for they shall see God.'
III. I am September now...

This music was commissioned by Maria Degenfeld Miller on behalf of the fortieth anniversary of the founding of the Virginia Recording for the Blind and Dyslexic, who was a Capricorn and who owned the beautiful home, Cashmere, in Barbados.

The punctuated rhythms and syncopations of African derivation which overlaid the contradance, the most popular dance in the Caribbean during the nineteenth century, combined to form the first musical genre that truly had a Caribbean character. The fast, upbeat opening Danza reflects these influences. Besides turning itself into a percussive ‘wood drum’ at times, the piano also simulates the low, deep rolling sea (can you hear where this passage is?!).

The Beatitude of Movement II’s title acknowledges those physically blind, but not spiritually. This middle movement is calm and expectant, as if one is hearing and seeing in a world different than our own. Upwardly spiraling passages signal a heavenly direction.  “Purity of heart” indicates single-mindedness, indicated by the main theme.

The final movement brings together many threads from Mrs. Miller’s full and many-faceted life. Having been born in Bavaria, she spent many years in Cuba where her husband was with the American Embassy: a waltz rhythm turns into the dotted notes of the habenera. Her lovely farm in Charlottesville called forth a quote from “In the Blue Ridge Mountains of Virginia”, woven together with a popular Latin American melody.

The composer, as well as Mrs. Miller at the premiere of this music, is in the ‘September’ time of life. When the original flutist mentioned that one of her favorite songs was “The September Song”, Movement III’s title was foreordained. You’ll recognize the musical quote!

This music shifts between modal and polytonal  figures.  The composer continues to be interested in slight, incremental changes, for example, in phrase length or melodic figures. (Perhaps music charts a progress of how we change as human beings.) If the formal design were analyzed, one would discover dramatic musical events occurring at points one-third, one half, and two-thirds of the way through each movement.