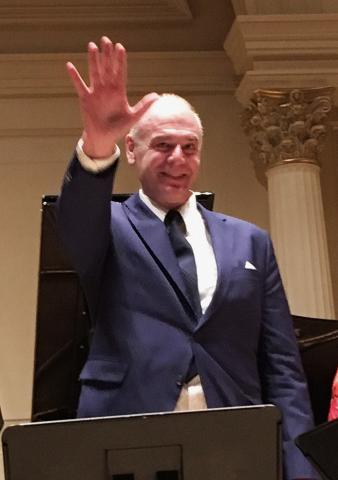 DANA DIMITRI RICHARDSON is a composer and music theorist whose seminal work on the 21st century harmonic system, syntonality, is published online by the Goldberg Stiftung. After earning a Ph.D. in Theory and Composition from New York University in 2001, he taught at Fredonia College and New York University. During 2004-2006 he worked as a securities analyst on Wall Street and is now running his own investment advisory service, Well-Tempered Capital Management, LLC, while maintaining his compositional activity throughout. 2007 Winner John Eaton Memorial Competition, New York Composers Circle. He is also a published poet whose Aphrodite and Other Poems is available on Amazon.com.

Dana Dimitri Richardson was born in Long Beach California in 1953. His music has been broadcast over more than 70 radio stations in the U.S. and Greece including WNYC and ERT, Athens, where he spent three years teaching music theory. During that period he was interviewed by Bobby Kanas on ERT and became a member of the Greek Composer’s Union. His record released on the Dionysian label in 1987 features The American Chamber Ensemble.

Dana wrote, researched, produced and hosted Modernism In Music, a series of ten 2- hour programs aired on WBAI (NYC) 1990 – 1991. Broadcast of the recordings was interspersed with commentary that investigated the relationship between social, economic and military history, and musical structure in the art music of the twentieth century.  He was the English text editor, and Greek to English translator of the deluxe 158-page program to the world tour of Mikis Theodorakis' Epiphania, Mauthausen and Axion Esti, in September 1993.

After earning a Ph.D. in Theory and Composition from New York University in 2001, he taught at Fredonia College and New York University. Since then he has taught music theory and history at Cooper Union, Nassau Community College, and Kingsborough Community College in Brooklyn.  In August 2007, he delivered a lecture at the Aspen Composer’s Conference on the relationship between syntonality, his original system for musical composition, and his compositional practice and in 2009 his article Syntonality: A new System of Harmony was published in the first issue of the SCI online theory journal. Hard core music theorists can access the monograph here.

In 2008, Richardson's Ballade for piano solo was awarded first prize in the New York Composers Circle Competition. In parallel with his concert music composition, he has written syntonal rock music. The CD, Bonds of Life, featuring his syntonal rock music was released in August 2014.  His music is regularly performed, in New York City, and internationally, including in Perugia, Rome, and Assisi. In 2016 he presented a program completely devoted to his work at Weill Hall.  Dana’s YouTube channel

He has recently finished a novel and is also a published poet whose Aphrodite and Other Poems is available on Amazon.