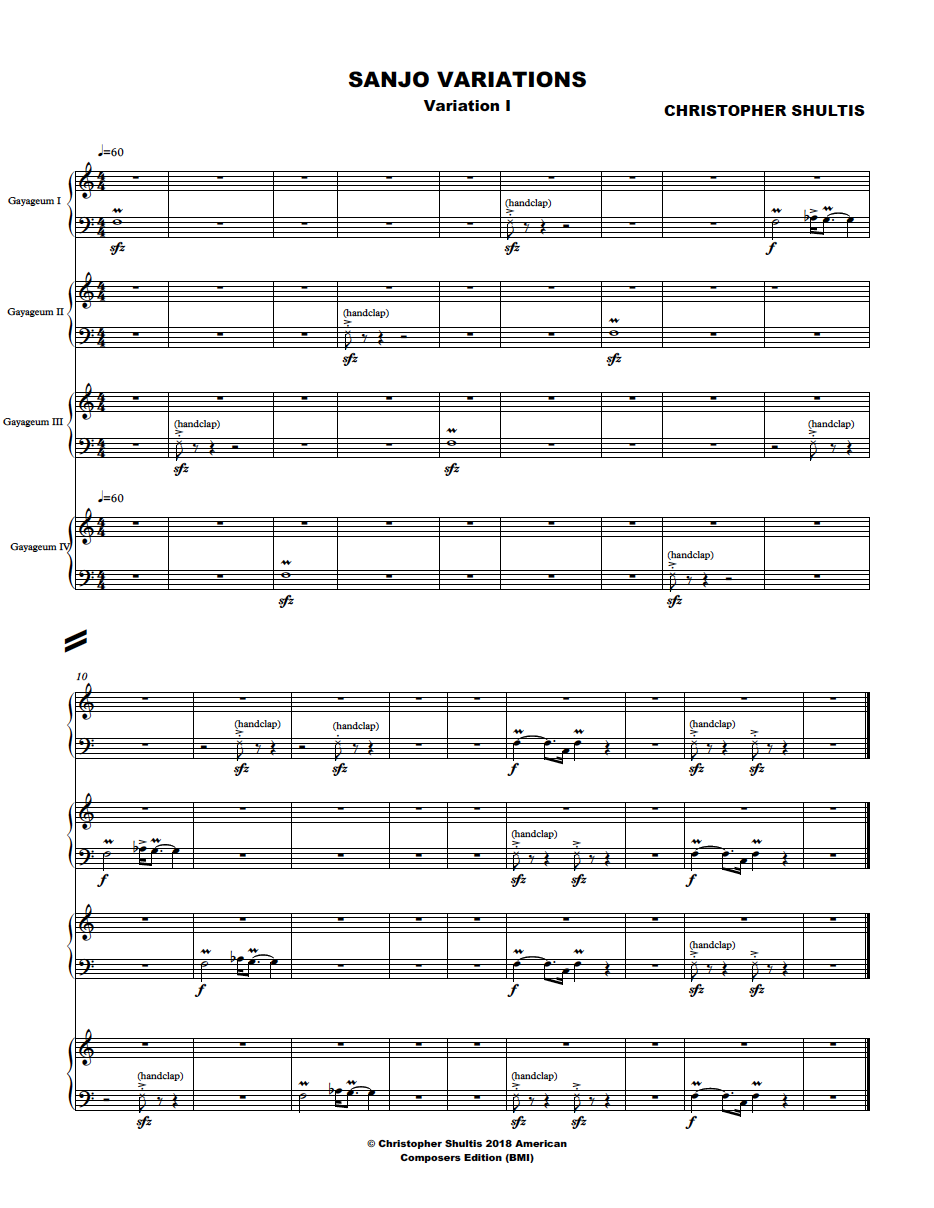 As a person and composer, my exposure to Korean music and culture has been a life changing experience. When I first heard Sanjo, those slow opening tones, the framing of musical space with sound, I was astonished. For this is similar to how I listen and create in my own music, and hearing Sanjo in concert for the first time was a revelation to me. I always write freely and with no predetermined conditions, that's how I work as a composer.

But this commission had three very specific conditions: first it must be based on Sanjo, which certainly doesn't need anything I might add; second it had to use the gayageum in its original tunings (I had changed all the tunings in Circlings, a collaboration with video by Hee Sook Kim and the first piece I wrote for the Gyeonggi Gayageum Ensemble, premiered in 2010 during a festival on Korean music and art at Haverford College that Professor Kim organized); third, it could use no video and no electronics (both used in Circlings). I had originally intended to do all those things I was told I couldn't do, and as I listened to a Sanjo recording the ensemble sent me, it's very perfection seemed to need nothing other than me listening to and enjoying it like Korean audiences have been doing for many, many years. So what could I do?

Surprisingly, I did what I did in Circlings, written when I knew very little about Korean music. In that piece I used the Gayageum as material, the first time I used my modular method of composing where I write down what I hear in segments and put them together at the end. For my Sanjo Variations I used the Sanjo as material, in ways I'm sure for a Korean audience will be quite obvious. Then using that same method of modular form, I wrote down what I heard, in my current place of listening inspiration, Old Haverford Friends Meeting, a Quaker meeting house where I can listen in complete silence. Silence is where I always find what, as a composer, I need to hear. Those segments were put together formally, using a numeric system I discovered while walking in the French countryside this past summer.

I would like to thank the Gyeonggi Gayageum Ensemble for this commission and also for their enthusiastic embrace of my music from when we first met until the present day. But I would also like to express my deep and abiding appreciation for all things Korean and, specifically, Korean folk music. Thanks to hundreds of recordings sent to me by the Korean government, and an invitation to participate in the International Gugak Workshop in Seoul, where I was able to take lessons in Danso flute, Janggu, and Gayageum, as well as attending lectures by many leading authorities on Korean folk music, including the legendary Hwang Byungki, I have been privileged to learn much about what Koreans call Gugak. Not one single piece of music I've written since hasn't been influenced by what I've learned, and continue to learn, from this great musical culture. My Sanjo Variations should be heard as my way of saying thanks.