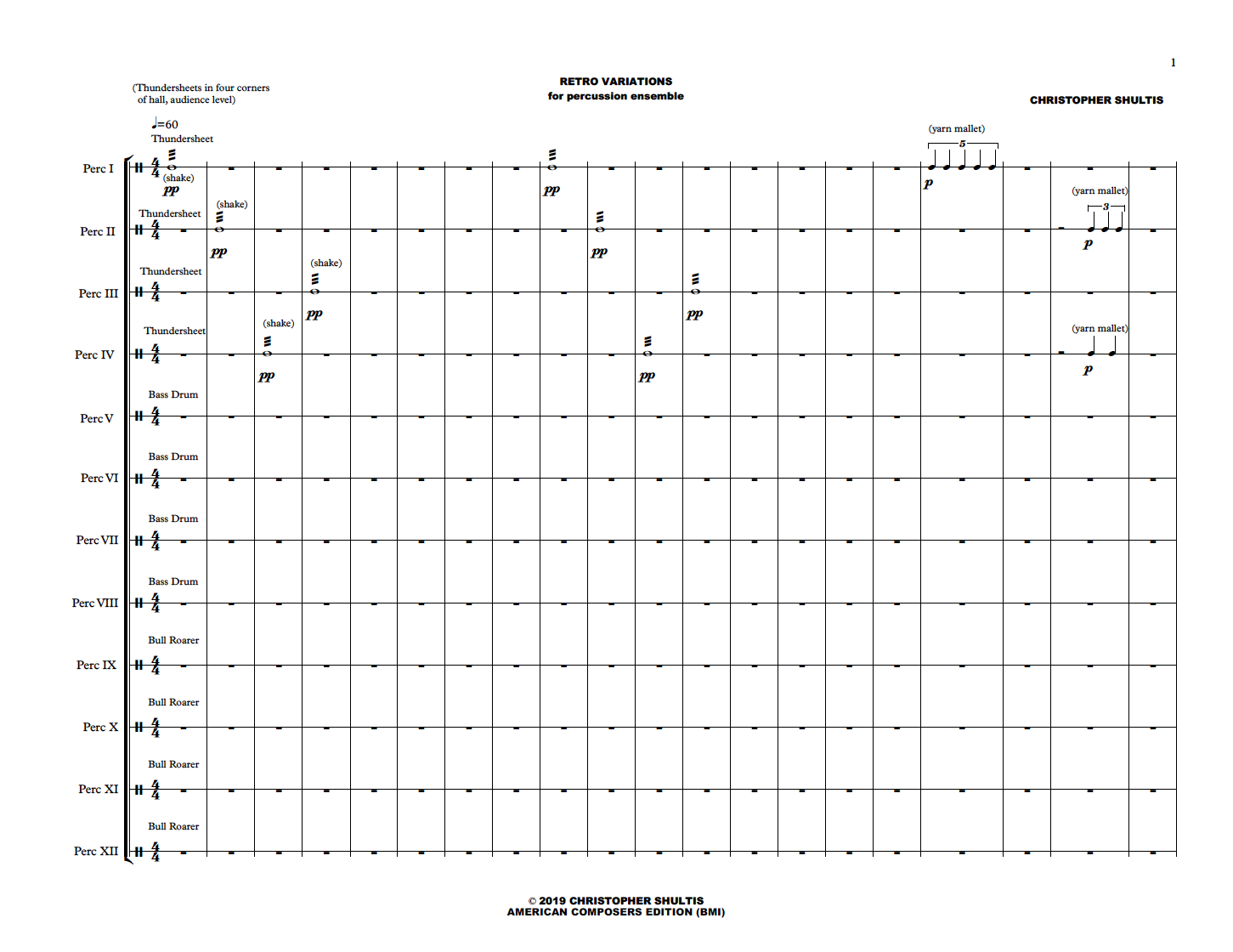 Retro Variations is the second in an ongoing series of “variations,” the first being Sanjo Variations for Gayageum ensemble in 2018. The first uses the Korean sanjo as source material. Retro Variations uses the early percussion music written in the 1930s. I was inspired hearing a great performance by the combined Oberlin/University of Illinois percussion ensembles of Jose Ardèvol’s Suite at the Percussive Arts Society Convention in 2018. I’ve always loved the wildness of those early pieces, many of them placed in the Edwin A. Fleisher Collection in Philadelphia by John Cage in the 1940s, and I first heard and studied them (I wrote a research essay on the subject) as a graduate student at the University of Illinois. When I visited the Fleisher Collection, in preparation for a presentation about these pieces at the 1986 Percussive Arts Society International Convention, I saw in the card catalog how few people had visited previously. One of those people (no surprise to me) was Michael Rosen. I thought the many connections between Michael and I with this music (we both did graduate work at Illinois, Fleisher is in Philadelphia, Michael is from Philadelphia and I now live in Philadelphia) would make for a meaningful experience for me to compose and him to conduct.

In the Sanjo Variations the reference is obvious, at least to Korean audiences for whom the Sanjo melody is universally known. For the Retro Variations the references are likely not so obvious so I include them here. The form of the piece loosely follows the square root form John Cage created and used in his early percussion pieces: in Retro Variations, the piece is in three parts  (with introduction and coda) using the square root of 9x9. The motives I use, with one exception, are drawn from Johanna Beyer’s IV, Lou Harrison’s Canticle No. 1 and the aforementioned Ardèvol Suite. Instrument choices, again with one exception, also harken to those early percussion pieces. And ultimately, it’s that sound world that provides continued interest in those pieces. In any case it’s what influenced my composing of Retro Variations

The one exception concerns a strange moment in the piece that seemingly appears out of nowhere: four players two each playing the “cadential” melodicle rhythm from Harrison’s Canticle on marimba and vibraphone. I had already planned to “inscribe” the pitches found in Michael Rosen’s name (BCAE), possibly in the almglocken and Thai gongs (they are used there too.) But the surprise came for me, composing as I usually do in the quiet solitude of Old Haverford Friends Meeting House, and recently hearing of my friend Michael Colgrass having passed away (another Illinois percussion alum), when I decided to include his name into the mix, the added G made a C major seventh chord with an added 6th. Played on marimba and vibraphone, moving upward repetitively and by inversion, this is something one might hear in a tonal minimalist piece, performed by any number of professional percussion quartets that champion such work, but here in an homage to those early experimental pieces from the 1930s where such instruments were never used and such tonality was intentionally avoided? I was as surprised then as the audience likely will be. And yet, there it was, and is, and somehow (in a way I’m unable to explain) it “fits.”

Is it drawing a continuity between two important periods of percussion music (30s, 80s); is it ironic (or maybe just humorous) that the pitches of the two Michaels insert such out of place and conventional tonality in an otherwise highly constructed but nonconventional piece? And when those instruments and pitches are swallowed up in the conclusion, where the theme from Colgrass’s own variations dominates—the atonal Fantasy Variations, my favorite piece of his, and which also uses marimba and vibraphone—what in the end does it all mean? I’ll let the listener decide.