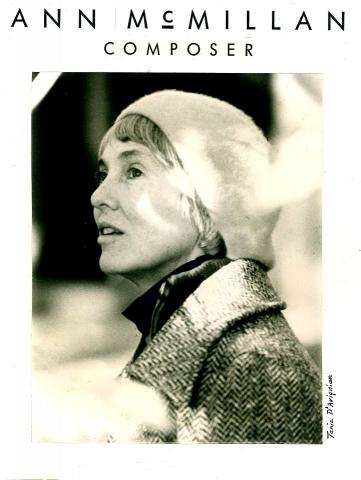 "[Ann McMillan's] pieces deal with human vocal sounds, insect sounds, bird calls, and water sounds, but like all of McMillan's materials, they are altered almost beyond recognition. It's a little like what happens to visual images when they get transformed into a Klee or a de Kooning ... McMillan, a former Varèse student, has a sensitive ear .... "
--Tom Johnson, The Village Voice

Ann McMillan was born in New York City and grew up in New England, England and Wisconsin. She graduated from Bennington College in 1945, having majored in Composition and French Horn. She helped open the LP program for classical music at RCA Victor Records and in the fifties met Edgard Varèse. She became his student and assisted him on the tape portions of his Deserts. From 1955 to 1957, she worked with a Fulbright Grant in Paris at the Radiodiffusion Television Francaise Studio d'Essai on "Recording Techniques for Music Composition." On return to the States, she worked for their overseas studio in New York, composed a film score for Rhino Safari, a Norwegian documentary, and broadcast radio essays written for CBS's French and English networks.

In 1965 she became Music Director of radio station WBAI-FM in New York City. She left the station staff in 1968 to concentrate on composing. McMillan was awarded a Guggenheim Fellowship and a CAPS grant and resident fellowships at the MacDowell Colony and Ossabaw Island Project. Commissions included an orchestra work for Joel Thome's orchestra of Our Time of New York City, and a violin and tape piece for Manuel Enriquez of Mexico City, works for Moses Asch, Max Lifchitz, and Quintet of the Americas. She was guest editor of the Contemporary Music Review. April-Episode, for live and tape part harpsichord, was performed by Joseph Payne at Fenton House, London's Camden Festival, March 30,1979. The tape part of that piece is a complete piece in itself, called Episode.

In 1977 her music was presented at the 13th annual Avant Garde Festival in New York City, commissioned by Charlotte Moorman and the Port Authority of New York.