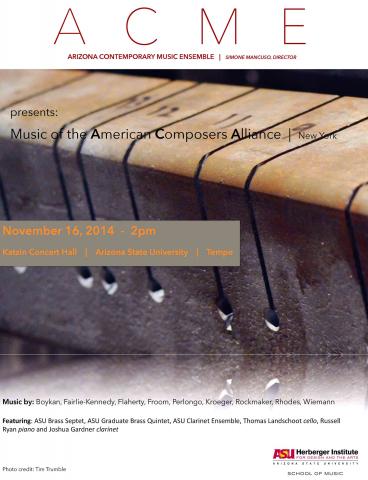 The Arizona Contemporary Music Ensemble (ACME), directed by Simone Mancuso, is a group devoted to the performance of modern and contemporary chamber music. ACME was founded by Dr. Glenn Hackbarth in 1978. Since then, the group has performed over 700 works, including many world and Arizona premieres. ACME offers selected students the opportunity to perform at the highest professional level, playing the most significant music of our time, from masterworks of the 20th century to the most recent works of this new century, as well as new works by ASU faculty, selected student composers and renowned visiting composers at ASU.

A distant, fond memory: standing in front of the Rome Terminal Train Station, the sun setting slowly in the cooling, winter air. First, the racket starts. One, two, soon thousands of birds begin to chatter to one another . Then one takes flight. Then another, and another, until the sky is filled with a cloud of starlings shifting in space. A dense cloud is stretched to near-transparency, then re-formed while kaleidoscopic shapes mesmerize. A rebellious faction breaks off, goes its own way counter to their peers, and then join the main mass again. Every now and then a group settles back in the trees, a brief repose before launching themselves again. Finally, as the sun sets, whole groups return to their nests, and settle for the night.

Goin Like Gangbusters (Rockmaker)
The cellist, Thomas Landschoot, approached me after a performance of my work, Equal Partners for violin and piano. He was very excited about the composition, and wanted a similar piece he could perform. Never one to turn down a request from one of my talented colleagues, I tried to write a piece that would capture Tom’s passion and enthusiasm for making music, as well as provide an opportunity to showcase Tom’s virtuosic playing. Goin’ Like Gangbusters is a short ditty, alternately bombastic or flowing and lyrical, meant to highlight the players’ talents.

Scored for instrumental voices usually only found together in a larger orchestra, Songlines reveals a variety of subtle timbral effects and coloristic possibilities in an intimate, uniquely imagined quartet for flute, clarinet, violin, and cello.

Mr. Boykan uses techniques—extended in some cases—idiomatic to each of the instruments as a way of defining each individual’s personality throughout the work. The flute is represented through use of flutter tongue, the clarinet in part darker color and use of trills, while the violin and cello are often featured playing first pizzicati passages, and then sustained double stops during reflective moments.

Songlines’ ethereal atmosphere is created in part through the registral implications of Mr. Boykan’s orchestration. Three of the four instruments are considered treble voices. The cello also lends a lilting tenor color to the mix much more than a foundational bass voice. With this lighter texture, the buoyant voices seem to chatter and converse, weaving in and out of one another rather than emerging from a treble-bass verticality.

Exchanges back and forth—at once conversational and indeed songlike—between the voices are often punctuated by silence in Songlines. Continuous movement versus discontinuities in the form of breaks, stops, starts, all draw the aural attention of the listener. Juxtaposition of slurs with staccato, wide intervals with neighboring tones, and complexities in the rhythmic palette all contribute to the changing dynamic of flow that characterizes this piece.

Ms. Fairlie-Kennedy composed works for voice, orchestra, and mixed media. Her music extends the usual sonorities of the instruments and has a strong rhythmic drive at its core, and she often incorporated serial techniques including full 12-tone rows into her pieces. 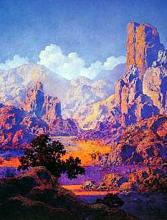 Composed after the painting, “Arizona” (1950), by Maxfield Parrish, Desert Echoes won the competition sponsored by the Pennsylvania Academy of Fine Arts and the Philadelphia Classical Symphony.

This work begins with ethereal tremolos in the strings, and the pianist executing extended techniques inside the instrument. Often gliding or easing chromatically into progressively more flowing lines, this approach is juxtaposed with scalar flourishes, often in the clarinet and flute.

The winds then mimic the opening string tremolos with trills and their own oscillating motions. Rhythmic punctuations bring clarity to a nuanced textural landscape. It is fascinating to look at the score, as many specific directions plan every gesture – intent to build and fall away is deliberate and carefully planned by Ms. Fairlie-Kennedy.

While changing meters are used, naturally strong beats are used as landing points to ground the building activity.

The use of different dynamics between voices, and especially a pulling away or “echo” effect, may well be employed to evoke shadings in the painting on which this piece is based. It is an aural chiaroscuro, in which one voice occupies the foreground, and another resides in the background, barely visible.

The way in which Ms. Fairlie-Kennedy’s combines the different possibilities of available instruments lends many shadings of color to the work, as does her unique employment of the voices’ characteristic registral shadings.

The piece ends with a foreboding rumbling within the piano, harmonics on the strings—in an exact retrograde or mirror to how it began—and is held until faded out almost entirely.

During the fall of 1957, Picasso painted a series of 58 studies which were called “Las Meninas, after Velazquez.” The original painting referred to is Diego Velazquez’s famous La Meninas (The Maids of Honor), which is a large, complex portrait of the family and members of the court of Philip IV of Spain in 1656. Picasso’s studies focus not only on the larger group, but more intently on individuals (in some 30 of the studies) with special attention given to the King’s young daughter, the Infanta Margarita Maria. 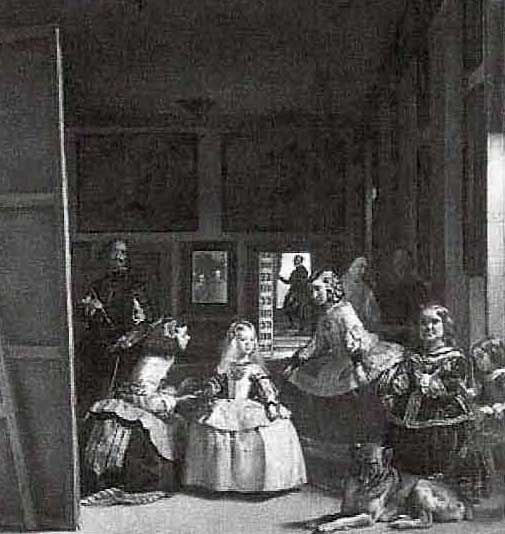 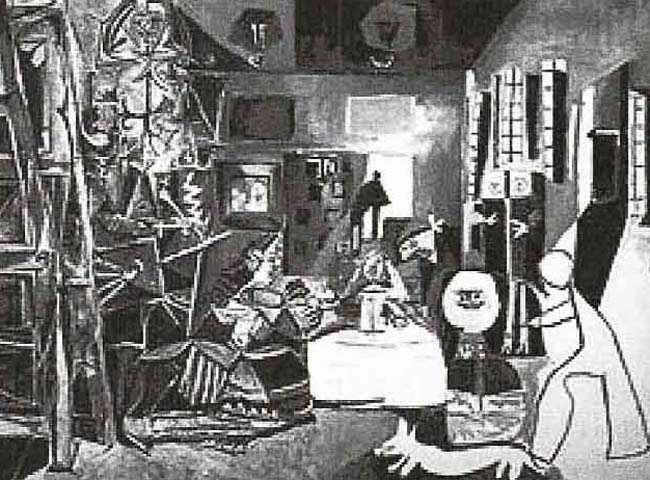 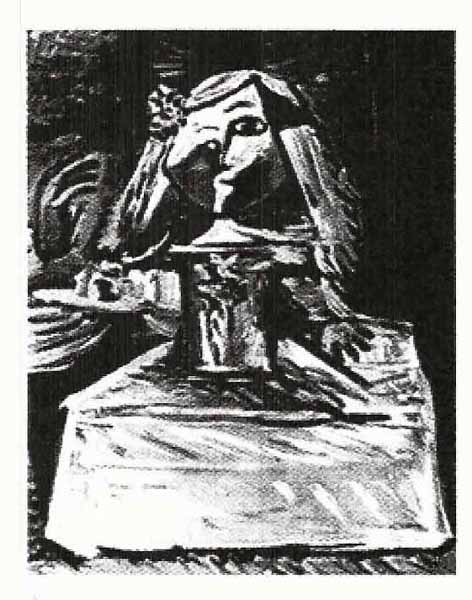 Having had the coincidental opportunity of seeing both the Picasso studies and the Velazquez in a short span of time, I became fascinated with the idea of trying something similar myself. In my project, the musical model would be Stravinsky’s Symphonies of Wind Instruments (the 1920 version). This is a remarkable work which I have admired and studied for years. It also seemed to me that one could draw an analogous formal relationship between the Picasso studies and the Stravinsky. Not unlike Picasso’s individual studies, the Stravinsky work unfolds in a series of short, highly contrasting sections. And in both works, it is apparent that each section forms a piece of a larger, coherent whole.

Moreover, when one compares Picasso’s studies to the Velazquez painting, a strong notion of fantasy comes to mind – certainly in the sense of fantasy variations upon the subject matter of the original. It was my intention to follow a similar path of fantasy variations in this homage to Stravinsky and hence the title, Following Picasso (A Fantasy After Stravinsky).  –Phillip Rhodes

Barboteo was written for violinist Anatole Wieck, and premiered in Cholula, Mexico in May 2011. The work is named for the “muttering” texture that occurs throughout the piece, sometimes as the primary focus of a passage but sometimes becoming an accompaniment figure underneath long lines in the violin and clarinet. The last section of the piece allows the muttering to become less agitated, so that the work closes with a much calmer demeanor than it had when it began.  –Beth Wiemann

The Dances of Albion were “inspired” by Edward Rutherfurd’s novel “Sarum.” I had been asked by Charles Wolzien, the guitar teacher at the University of Colorado, to compose a piece for him and his wife, a concert flutist, to play. In fulfilling this request, I remembered being impressed by the chapter in “Sarum” dealing with the building of Stonehenge and wondered what uses music had among the ancient Britons. I settled on three: courting, spring rituals, and harvest festivals. These became the bases for the fantasy dances that make up the piece. The Courting Dance contrasts a lyrical melody with bravura display – the sort of piece a young suitor might play to impress his lady. Spring Caroles is a round dance, in which the first warm days after a harsh winter bring out enthusiastic rejoicing. Harvest Dance begins ominously with the warning “winter is coming”, but the celebrants, primed by joy in a good harvest, do not take heed and participate in a vigorous and joyful dance. The Dances of Albion was first performed in Boulder, CO, in 1990 by Karen Yanowitz, fl., and Charles Wolzien, gtr.

The "wagon wheel effect" is an optical illusion often seen in films, when a wagon wheel seems to be spinning impossibly slow, or even moving backwards. The relationship between the speed of the wheel and the frame rate of the film is responsible for the effect. Wagon-Wheeling plays with the relationship between two or more rhythmic passages, which in some combinations can create similarly paradoxical effects on our experience of tempo. At times the listener might have the impression of speeding up and slowing down at the same time. Not incidentally, the piece sometimes takes on the loping gait of galloping horses, and briefly breaks into an exuberant country waltz. Wagon-Wheeling was written for Aron Kallay, whose musical artistry and indefatigable energy are inspiration for all.

Tango Around Cape Horn for brass quintet is based on my impressions of Cape Horn and its environs, including the Strait of Magellan, the Beagle Channel and Tierra del Fuego. The whole is unified by a single rhythmic ostinato that divides a common time measure into 3+3+2 parts. I was inspired to use that figure by my enjoyment of hearing it in several Astor Piazzolla tangos.  –Daniel Perlongo.   A quotation on the subject directly from Darwin, provided by the composer, reads as follows:

“…We closed in with the Barnevelts, and running past Cape Deceit with its stony peaks, about three o'clock doubled the weather-beaten Cape Horn. The evening was calm and bright, and we enjoyed a fine view of the surrounding isles. Cape Horn, however, demanded his tribute, and before night sent us a gale of wind directly in our teeth. We stood out to sea, and on the second day again made the land, when we saw on our weather-bow this notorious promontory in its proper form — veiled in a mist, and its dim outline surrounded by a storm of wind and water. Great black clouds were rolling across the heavens, and squalls of rain, with hail, swept by us with such extreme violence…”

This light-hearted and outgoing work is intended to be a flashy showpiece, exhibiting the tremendous virtuosity of fine brass players. As the title suggests, the mood I intend to evoke is one of an exciting beginning, like a fanfare announcing the start of an event (or, in the most literal sense, the first play of a football game). The opening idea, which is the source of all the musical material, returns twice in ever more elaborate versions, until the energy it generates explodes into a final, exuberant “rush to the goal line.”  –David Froom

READ MORE ABOUT THE COMPOSERS AND PERFORMERS -